Green Boys is a locally owned and operated lawn care business residing just outside of Topeka, Kansas.   The company services Topeka and it's surrounding area.   The business is owned by Jeremiah and Sarah Richards.  Jeremiah holds a Bachelors Degree in Mechanical Engineering.   And, before he decided to pursue lawn care full time, he worked as a plant engineer for Westar Energy at Jeffrey Energy Center.  Sarah holds a Bachelors Degree in Elementary Education, and now stays home with their four daughters and son and helps run the business.   Jeremiah has several years of experience in lawn care, dating back to his high school and college years, when he ran a lawn care business in his hometown of St. Charles, Missouri.   At it's peak, Jeremiah's St. Charles business had 60 regular customers.   Sarah and Jeremiah really enjoy the outdoors and will work hard to satisfy their customers.   The company prides itself in it's flexibility and ability to meet customers' needs.  If you're looking for a small, local lawn care company where the owners are heavily involved in the day to day operations, then this is your company!

Green Boys LawnCare, Inc. strives to provide high quality lawn care services, that provide a benefit to our customers.  We will pride ourselves in customer satisfaction through flexibility and reliability.  We will work to keep costs low for our customers, by continually looking for opportunities to improve efficiency and lower our expenses.  We will strive for honesty in all of our dealings.  We will try to pay our employees a good wage and protect them from injury.  We will hope to make a good living for ourselves.  And above all, we will strive to follow the golden rule - treating others the way we want to be treated ourselves.

When Jeremiah was a young boy, there were some older boys who cut grass in the neighborhood.  The boys wore green shirts.  So, whenever Jeremiah's mom, Marsha Richards, saw the boys out working, she'd yell out, "There's those green boys again!", and kind of chuckle.  His mother's enthusiasm, and the recognizability of the boys in their green shirts, stuck with Jeremiah.  So, when he started his own lawn care business, he bought some green shirts, and put the name in print - "Green Boys LawnCare".   Originally, Sarah was lobbying for the name "Green Girls LawnCare", but she was appeased when her younger brother was hired on as a Green Boy! 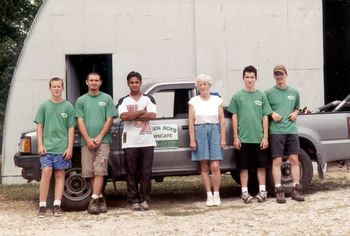